An allergy is a commonly occurring, chronic condition involving an abnormal reaction to an ordinarily harmless protein substance called an allergen. Sometimes it can be genetic.

Allergies are increasing in India and affect around 30 crore Indians. There are many causes of allergy, and symptoms can vary from mild to potentially life threatening. Allergy is one of the major factors associated with the cause and persistence of asthma, rhinitis, atopic dermatitis & sinus disease.

In a patient suffering from allergy, the patient’s immune system views the allergen as an invader and a cascade reaction starts. White blood cells of the immune system produce IgE antibodies. These antibodies attach themselves to special cells called mast cells, causing a release of potent chemicals mediators such as histamine which cause the allergic symptoms. 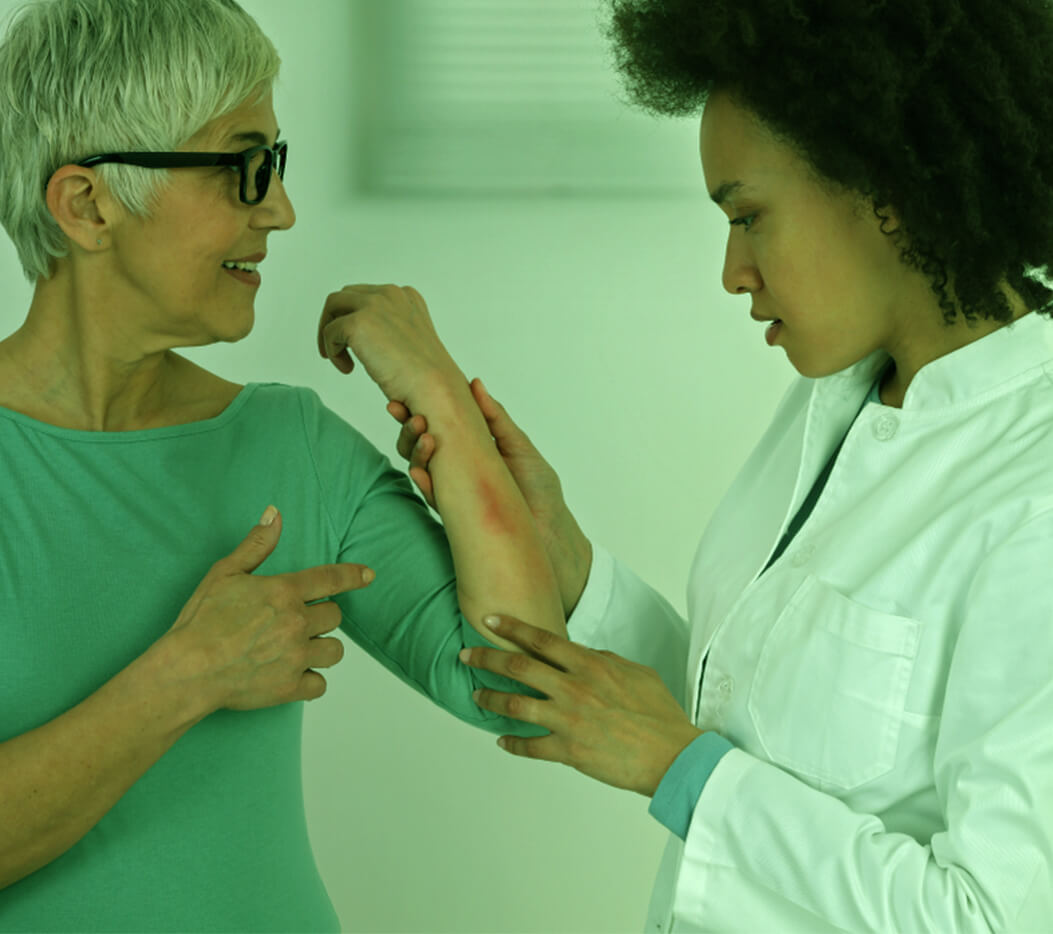 The word allergen can be any substance that either enters or come into contact with the body, which is capable of producing allergies. Allergens can be found in food, drinks, or the environment.Allergens can also include aeroallergens such as dust mite, fungus, tree pollen, weed and grass pollen, as well as food allergens such as milk, egg, soy, wheat, nut or fish proteins.

People experience different symptoms, depending on the allergen and where it enters the body. Allergic reactions can involve many parts of the body at the same time. Usually allergy affects the respiratory system, the skin, the nose and sinuses, and even the gastro-intestinal system.

If an adult or child has excessive allergy symptoms, it is advisable to visit an allergist, who has advanced training and experience to determine what is causing your allergic symptoms and may be able to prescribe a treatment plan to help him/her feel better and enjoy a better quality of life.

An allergy occurs when your body’s natural defenses overreact to exposure to a particular substance.

Bumps, itching, redness and other skin conditions are common, their cause may not be easily identifiable.

A pet allergy can contribute to constant allergy symptoms, can occur at any indoor environments.

If your eyes itch and are red, tearing or burning, you may have eye allergies (allergic conjunctivitis).

If you develop a rash, hives or difficulty breathing after taking certain medications.

it is quite common, and may cause itching, blistering & skin rashes.CANCEL-FATAL.

Molds live everywhere—on logs and on fallen leaves, and in moist places like bathrooms and kitchens.

one of the commonest allergens causing persistent, year-round symptoms.

An allergic reaction causes inflammation and irritation. The signs and symptoms depend on the type of allergen. Allergic reactions may occur in the gastrointestinal system, skin, nose & sinuses, airways & eyes. Some symptoms allergens routinely cause in people who are allergic.

Anaphylaxis is a quickly escalating, serious allergic reaction that sets in rapidly. It can be life-threatening and must be treated as a medical emergency.

-- Type IV reactions (ie, delayed hypersensitivity reactions, cell-mediated immunity) are mediated by T cells rather than by antibodies. An example is contact dermatitis from poison ivy or nickel allergy. 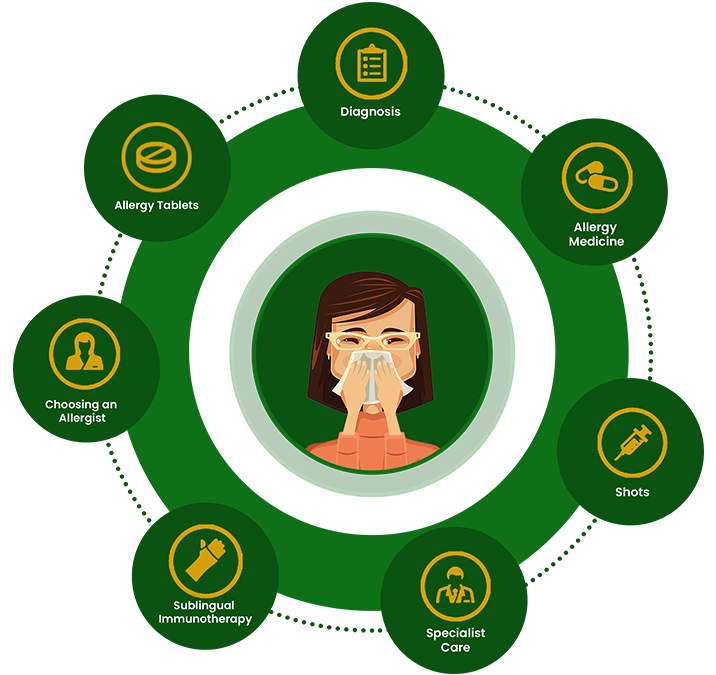 
(Its causes, symptoms and treatment)

Are You Allergic to Your Clothes ?

When certain physical or chemical agents come into direct contact with the skin, they might trigger an allergic reaction, causing the skin to become inflamed, red or itchy. This response is known as contact dermatitis.

This is a direct response of the skin cells to a causative agent. As soon as the skin is exposed to the irritant, the epidermal cells release mediators, which initiate and regulate skin inflammation. Although the intensity of the reaction depends heavily on the duration of exposure and the chemical components of the irritant, it is also influenced by existing skin conditions and disorders, and environmental factors such as humidity, temperature, etc.
Physical irritants include friction and grazing.
Chemical irritants include hand soaps, detergents, etc.

When the skin is exposed repeatedly to an allergen, it gradually becomes sensitised to the allergen, leading to inflammation and irritation. The causative agent first penetrates the outermost layer of the skin, after which it merges with skin proteins, producing an immune response. The skin may take 5 to 21 days to grow sensitised to the allergen. Common causes of allergic contact dermatitis include chromium, neomycin, nickel, balsam of Peru and cobalt. Allergens are often also present in jewellery.

There are certain factors which predispose individuals to developing AECD:

You may be exposed to certain irritants at the workplace, which may either cause an immediate allergic reaction, or sensitise the skin over a period of time. Agricultural workers, factory employees, cooks, mechanics, healthcare workers, cleaners, etc. are constantly exposed to potential allergens and irritants. The hands are one of the most common sites for contact dermatitis. Common irritants include paints, solvents, oils and detergents, while metals, epoxy resins, rubber, etc. are potential allergens.

Allergies to medicines and medical equipment :

Some creams contain preservatives, such as propylene and butylene glycols; parabens; benzyl alcohol, sodium metabisulphate; lanolin, etc.
Topical corticosteroids can also trigger AECD.
Latex-based medical equipment such as gloves, catheters, intubation tubes, etc., when exposed to over a long period of time, may lead to the development of AECD.

Certain substances, either when consumed or applied directly to the skin, may become irritants (phototoxic) or allergens (photoallergenic) when exposed to sunlight.
Phototoxic dermatitis is an immediate response, and occurs when the substance becomes an irritant in the presence of sunlight. It mostly develops during or after the first exposure.
Photoallergenic dermatitis develops over a period of time. The skin (mostly of the face and the hands) experiences inflammation as a delayed response to exposure.
Possible topical agents include: detergents, bleaching powders, soaps, cosmetics and lotions, ointments and perfumes. Possible systemic agents include: antibiotics, anti-bacterial medications, diuretics and antifungal medications.

Although the clinical presentation of contact dermatitis may vary depending on whether it is irritant or allergic in nature, common symptoms include redness, itching, rashes and inflammation. The skin may appear scaly, with well-defined borders.
A more detailed description of the symptoms is provided in the table below.

A full history of the patient’s occupation, pastimes and topical or systemic medication should ideally be taken into account when diagnosing contact dermatitis.
Patch testing is considered to be most effective. Patches contain small amounts of chemicals, metals, medicinal substances, rubber, dyes, and a variety of other additives to which the patient may potentially have developed an allergy. These substances are present in a diluted form. The patches are then applied to the patient’s back for 48-72 hours, where a localised allergic reaction may develop. This helps determine the causative agent.

Ocular allergy is estimated to affect at least 20 percent of the population on an annual basis, especially amongst the younger age group, and the incidence is increasing.

Allergies may frequently trigger an itching sensation in the eyes. Often, this problem is compounded with rhinitis (sneezing/watering and nasal obstruction). This is because your immune system may not have the ability to tolerate, or properly react to, certain substances present in your immediate environment. These substances (called allergens) include, but are not limited to, dust, pollen, mould and cosmetics. When such allergens are present in your surroundings, they can affect your eyes’ mast cells, causing an itching sensation.

There are various kinds of allergies affecting the eyes, each of which shows varying symptoms.

This allergy is caused by the presence of pollen in the environment, and is most commonly experienced.
Symptoms: You may experience itching, redness, stinging, watery eyes or burning.

Another very common type of allergy, caused by the use of contact lenses.
Symptoms: You may experience itching, mucus secretion, redness and a general feeling of irritation in the eyes.

Mostly affecting males, this type of allergy involves a year-round itching sensation, exacerbated during certain seasons. It is a serious condition which, if ignored, may damage your vision.
Symptoms: Besides experiencing intense itching, you may feel as though you have a foreign object in your eyes. Eyes may also secrete mucus, produce a large volume of tears and be highly sensitive to light.
Older people may develop a similar form of this condition, known as atopic keratoconjunctivitis, which can result in corneal damage if left untreated.

Headache: Is it related to allergy, migraine or is it a sinus headache?

Allergies are linked to two types of heada ches: sinus headaches and migraines . If you feel pressure in and around your nasal cavity, you or your doctor may assume you have a sinus headache. But you may have an allergy-induced migraine instead. A specialist ENT may be able to diagnose whether you are su ffering from either sinus headache or migraine. In some cases, managing your allergy symptoms may also help you control your migraines.

There are various kinds of allergies affecting the eyes, each of which shows varying symptoms.

Similarities between a sinus headache and migraine include:

Differences between a sinus headache and migraine

There are also several differences between a sinus headache and a migraine: If you have the following:

You may be suffering from sinusitis

If, however you are suffering from:

then it is more likely to be a migraine headache

Can allergies trigger a migraine ?

Allergy sufferer s are 10 times more likely than others to develop migraines.
One study found that people with allergies experience a higher frequency of mi graines than those who do not have allergies.
In fact the majority of people who appear to have a sinus headache without inflammatory symptoms and a normal sinus CT scan in fact have a migraine. There is no known reason why allergies and migraines are linked except that certain internal and external triggers release histamine in both conditions

How best to treat a n allergy-related migraine ?

Factor in both your allergies and your migraines when seeking treatment.

Controlling allergies should be your first line of treatment. Your doctor can perform allergy tests to determine what you ’ re allergic to and how to treat it.

Simultaneously the migraines should be managed , either by treating the symptoms as they occur with medications like nonsteroidal anti-inflammatory drugs or, if the migraines are repeated and severe, other medications can prevent the onset of a migraine, including antidepressants, beta-blockers, and calcium channel blockers. Along with the medications, your doctor may prescribe a migraine-prevention diet for you.

Ensure that all treatment is taken under competent medical supervision, as medicines may have side effects.

The only treatment that will continue to benefit the patient after the completion of the course. Immunotherapy suppresses the Th2 response and promotes T-cells, thus strengthening the body’s ability to tolerate the allergen. Two of the most common kinds of immunotherapy for ocular allergies are:

Cromolyn Sodium  or Nedocromil sodium. During an allergic reaction, the antibody IgE, which is present on the surface of mast cells, attaches itself to proteins present in the allergen. This often leads to problems like congestion. Mast cell stabilisers can prevent this process when administered as prophylactics before the onset of an allergic reaction.

This treatment combines mast cell stabilisers and antihistamines. The antihistamines help in relieving the symptoms of the allergy, while the stabilisers work towards preventing allergic reactions in the future.

Steroids are effective immediate treatments that help mitigate immune responses to allergens. Long-term consumption, however, may result in problems such as cataract formation.
Ophthalmic steroids are very often combined with dual-activity agents, when the symptoms grow more noticeable. They may even be used when the patient is expected to be exposed to allergens, in order to prevent an allergic reaction.
Topical ketone-based steroids are very strong, and are only needed to treat severe allergic reactions. They are not used very often due to the possibility of deteriorative side effects on the eyes.
Nasal steroids, commonly used to treat allergic rhinitis, can also reduce the effects of an ocular allergic reaction.

Call us for any question